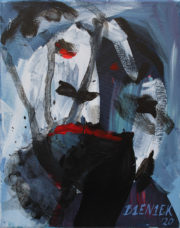 Sebastian Bieniek (B1EN1EK) born 1975 in Upper Silesia, moved 1996 to study under the performance artist Marina Abramovic and the swiss conceptual artist John M. Armleder art to Braunschweig. Two years later he moved to Berlin. 2002 he became a Meisterschüler of the University of Art Berlin in the class of Prof. Katharina Sieverding. 2002-2014 he has also study movie directing in the DFFB German film and tv school Berlin which he left with a degree of movie director in 2014. His best known artworks are radical performances, conceptual paintings which have often a humorous and ambivalent message and so called Doublefaced photographs, where he also works with in the field of humor, ambivalence and illusion.

<BACK | PREV | NEXT
< Back/Artists/Sebastian Bieniek